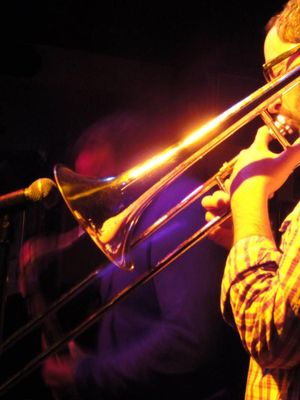 Squantch played his first professional gig when he was fifteen years old, leading his jazz quintet on the bow of a yacht.  In the twenty-five years since that occasion, he has performed and toured extensively, playing styles ranging from avant jazz to zydeco, and recorded more than twenty albums.  Squantch graduated from Berklee College of Music having studied with Dr. Phil Wilson.  At the University of Miami, he studied under Dr. Charles Cambell (Philadelphia Orchestra).

Squantch has toured North America and Europe with a variety of bands, including the widely acclaimed jam band Topaz, acid jazz gurus The Groove Collective, and the innovative ska ensemble David Hillyard and the Rocksteady VII.  His music was featured on HBO's Sex and the City and The Sopranos, the film Beavis and Butthead Do America, MTVs I'll Bet You Will and in numerous commercials.  Tracks recorded for Roger Sanchez, Tortured Soul and Better Daze have become staples in dance clubs around the world.