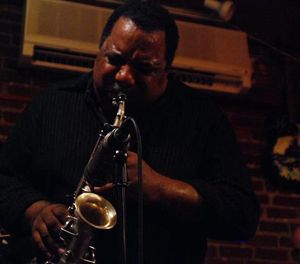 A renowned sax player, Henley Douglas Jr. has been performing professionally for over thirty years.  He’s formed and led countless bands.  His music appears on over a dozen albums including a CD of original music as a soloist.  He’s shared the stage with everyone from the Neville Brothers to the Red Hot Chili Peppers to Laverne Baker.  His music is featured on the upcoming reggae documentary “Reggae in the Ruff.”  He co-founded a nonprofit organization supporting music education programs in schools and youth centers.  Just when we think he’s done it all, Henley turns another corner and finds a new way to share his passion for music.

During his early years in Boston, his first band, The Henley Douglas Group, built a strong local following at Satch’s, a legendary jazz club owned by famed Boston Celtics player Satch Sanders. The group featured some of the best up and coming jazz players including drummers Jeff Tain Watts and Smithy Smith, and vibraphonist Gust Tsilis and Ron McWhorter on bass.

In the mid to late 80’s, Henley broadened his musical boundaries by becoming a member of the Bobby Watson Blues Band.

His journey continued and his sound diversified as a member of Skin, a band that was one of Boston’s best known funk/rock groups. Skin shared the stage with acts like Barrence Whitfield and Savages and Fishbone at Boston’s legendary club the Channel, the Neville Brothers at Jonathan Swift’s, and the Red Hot Chili Peppers at the Paradise. Skin’s single “Troubled Sleep” was one of the longest running songs on WBCN’s top twenty list.

For years, Henley was a central sax figure in Boston and Cambridge, sitting in at jam sessions at clubs like the 1369 Jazz Club, the Plough and Stars, and the popular blues rock jam at Bunratty’s in Allston with the Wrecking Crew.  At Bunratty’s, he’d meet musicians he’d later recruit to join his bands, most notably trumpet player Garret Savluk, who was performing in the Brandies University Jazz Band led by Ricky Ford. Garret’s amazing sound and talent caught Henley’s ear immediately, and he introduced him to friends John Vanderpool (saxophone) and John Ferry (trombone). This group started out as a horn section for hire by blues, funk, rock and reggae bands throughout New England.

In 1989, Henley performed with Rock and Roll Hall of Fame inductee Laverne Baker during several shows in NYC, and later, this group of horns for hire  began to get more recording work with James Montgomery and can be heard on the Del Fuegos “Smoking In The Fields”.

The I-Tones, Boston’s legendary reggae band, hired the horns to join them for some shows and lay down tracks in the studio. This led to a performance at Boston’s popular “Concert on the Commons” series, featuring the I-Tones, Yellow Man and Third World.

Soon after, the Heavy Metal Horns was created.  The group who had been horns for hire – Henley, Garret, John Vanderpool and John Ferry, were joined by six others to form a 10-piece outfit who quickly became one of Boston’s most popular bands in the 90’s.  The music the band played had only one rule: “The music must groove madly.”  Within two years, the band garnered many musical awards and was packing clubs throughout New England.  The band shared the stage with Tower of Power, Little Feat, The Dirty Dozen Brass Band, Toots and the Maytals, James Cotton and more. The Heavy Metal Horns’ horn section joined Extreme on their 1993 “Stop the World” global tour. This experience helped launch the band into bigger and better gigs.  Performances at the Montreal Jazz Festival and San Jose International Jazz Festival followed, along dozens of with blues and music festivals throughout the country.

Henley left the Heavy Metal Horns in 1997 to continue to explore his musical interests. This led to his first solo jazz CD “Hazel’s Light,” consisting of all original music. It was around this time that Henley met B3 Hammond blues master Ron Levy and began playing with Ron Levy’s Wild Kingdom. The group did a national tour and performed throughout . Garret once again joined Henley on the Wild Kingdom tour.

One night, Henley and Garret heard Karl Denson’s Tiny Universe, who shared a bill with Ron Levy’s Wild Kingdom and Deep Banana Blackout.  Inspired by Karl Denson’s unique, powerful, horn-driven sound, the two decided to form the Boston Horns.  The Boston Horns went on to become another one of Boston’s top bands, sharing the stage with Tower of Power, Big Sam, Little Feat and more. They recording seven albums and were signed to two Japanese record labels, resulting in a tour in Japan in 2004, where they played at the famed Blue Note clubs in Nagoya and Osaka.  They played countless well known clubs and festivals in the US, and Henley and Garret also took the stage at the New Orleans Jazz and Heritage Festival with the Brotherhood of Groove.

In 2007, Henley co-founded the Salem Jazz and Soul Festival along with his friend Larry Claflin.  The 501c3 nonprofit organization produces a popular series of free concerts for the public and raises funds for music education programs in schools and youth programs on the North Shore of Boston.

After 12 years with the Boston Horns, Henley once again decided to head into a different musical direction. This has led to the formation of four groups: Soul Force V (B-side soul), The Cool Times Quartet, his original project HDRnB featuring singer/songwriter Douglas Gimbel, and The Henley Douglas Group (instrumental jazz, blues, and funk). All four bands are currently enjoying a busy schedule performing at clubs across New England.Henley also performs with the Boston Horns Big Band, an 18-piece contemporary group that has backed Grammy award winner Paquito D’Rivera and James Montgomery among others.

Recently, Henley laid down sax sounds for “Reggae in the Ruff,” a documentary by film maker Don McConnell about Jamaica’s roots-reggae band Johnny Walker and the Disappointers. This project will feature 2 CDs, the first with Henley playing horn lines with music recorded in Portland and Jamaica, and the second featuring instrumental work with Henley playing his own leads to the rhythm tracks laid down by the band. “I was able to embrace the music very easily because, first of all, it sounded great and I wanted to be a part of it. But also I understood I had to honor it. To support it. Not to try and take it over. Because Johnny Walker and the Disappointers, they show you the way.“

“I like to go out and play all kinds of music -- jazz, funk and blues. But my favorite experiences are when I play in groups that combine all of those things. Original, grooving music. That’s what I’m into. That’s what I do when I go out. There’s nothing like being in a little club, and it’s jam-packed. And that music is hitting somebody. And it hits their soul, and it comes right back to you. That’s the connection. That’s what I really, really love.”